The urge to smurf

When government gets greedy, some people turn to crime 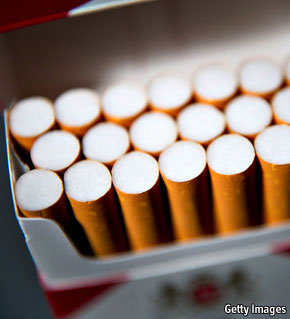 Baccy for the clerk

THE busy interstate highway that zips through Richmond, Virginia, and up to the crowded cities of the north-east has long been a conduit for handguns bought wholesale in Virginia and sold to drug-dealers in New York. Now I-95 is siphoning northwards another form of contraband: black-market cigarettes.

Because Virginia’s tobacco tax is the second-lowest in America, gangsters buy cigarettes there in bulk and sell them at enormous profit in New York and other high-tax states. At a minimum, they pocket a big chunk of the difference between what Virginia adds in tax—30 cents a packet—and the higher rates imposed elsewhere. New York’s tax, at $4.35 a packet, is the highest in the country.

The federal Bureau of Alcohol, Tobacco, Firearms and Explosives estimates that sales of illegal cigarettes cost government—local, state and federal—nearly $10 billion a year. For the smugglers, profits are better than those from cocaine, heroin, marijuana and guns, according to a report in September by the Virginia State Crime Commission. Moreover, the penalty for doing it—a maximum of five years in jail, under federal law—is considerably lighter than for selling drugs. If the smugglers were trafficking in heroin, they would face life in prison.

The growth of the cigarette-resale racket, known to police as “smurfing”, appears tied to a growing government appetite for cash. Since 2007 at least 27 states have raised their cigarette taxes, often to erase deficits or to cover sharp increases in health-care costs. This spurs the smugglers on. In New Jersey, where a packet of cigarettes carries a tax of $2.70, about 40% of all cigarettes are smuggled in from other states, according to the New Jersey Treasury Department. Maryland, Virginia’s neighbour to the north, reported a fourfold increase in seizures of illegal cigarettes between 2010 and 2012, though one official described the haul as the tip of the iceberg.

Virginia, a big tobacco state since colonial times, has recently declared it illegal to buy and possess, with intent to sell elsewhere, more than 5,000 cigarettes. That may sound a lot, but they are easy to miss. Smugglers can niftily get 600 cartons (that is, ten packs of 20 cigarettes) into a car, and 12,000 into a large van. When gun-running was at its peak, I-95 was known as the “iron highway”. Now it is the new Tobacco Road.